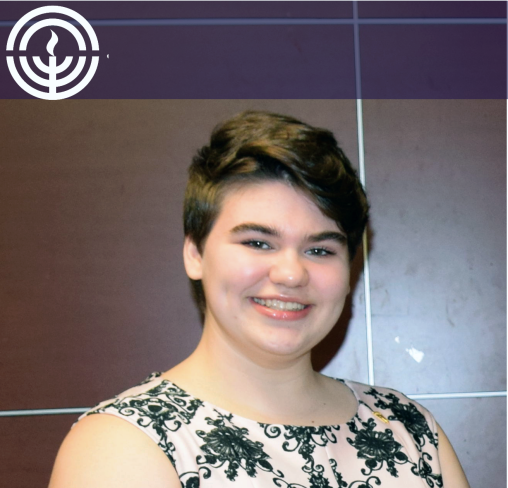 Hannah participated on the 7th Journey for Identity, a life-changing, 3-week adventure from Rochester to Poland and Israel with teens from Modi'in, our Partnership2Gether community in Israel.

“My grandmother grew up in Lithuania and was taken to a concentration camp when she was young. While being held at a barn, she and two friends decided to run toward the gate. One friend was shot; the other two split in different directions and my grandmother escaped. She was the only survivor in her family. Her mother had given her a spoon engraved with names of cousins in Israel; so she hid her Jewish identity until she could find those cousins and get passage to America. My grandfather grew up in Lodz; he escaped on the way to Radogoszcz, jumping out of a truck. My grandmother knew seven languages; I soaked up her Yiddish and Russian like a sponge. Because she passed away when I was in third grade, I feel that Judaism and its traditions are my connection to her, and how we preserve her legacy.”

“Holocaust remembrance is very important to my identity. Also going to Israel, and meeting Israelis, sounded amazing. We started in Rochester, hosting our Israeli partners. It was a week of mayhem – going on hikes and to the Museum of Play. Then we went to Poland and met [Rochester survivor] Leah Malek. The first thing we did was go to Lodz and Radogoszcz, which was really emotional for me. There’s something indescribably powerful about standing in the same space your relative stood, 50 years ago. In Poland we bonded and became a family. We had the lowest lows – processing our experiences at Auschwitz and Treblinka and having services there – but we also did the silliest stuff, like playing Apples to Apples at 2 AM. By having the bright spots, we made it through the lows. We saw a youth cemetery with mass graves. I couldn’t bring myself to take many pictures in Poland. But I think, if a situation isn’t difficult, how can it have a lasting impact on your life? Then we went to Israel, and I fell in love with the country. The history there is so rich and, quite literally, layered. We went to the Golan Heights, spent the night in a Bedouin camp and got to ride camels. It was so odd yet so comforting to look around and realize everyone around me was Jewish and there was Hebrew everywhere. I know the prayers well, but ‘Hineh Ma-Tov’ won’t help me order gelato. And here in Rochester, when we took our Israeli partners to temple, they didn’t know the prayers. They’re secular, but in Israel they still live Jewishly because they’re surrounded by Judaism.”

“I’ve always been passionate about teaching people about the Holocaust, especially living in Hilton, where we’re a tiny Jewish community -- maybe two families – and people don’t know. After the trip, that’s become an even bigger priority; I also began caring more about getting involved in the Jewish community. It was also unforgettable to hear Leah Malek talk. I wasn’t able to talk about the Holocaust with my grandmother because, being seven, it’s not a prime topic of conversation. Some of what Leah said will stick with me until I die. She was asked, ‘Do you ever want to get revenge on Hitler?’ She said ‘I’m getting revenge now – I’m alive, I have a family and I raised them Jewish.’ That made me realize I do want to raise Jewish kids someday.”

“Last August, I celebrated my 16th birthday in two countries. Before we left Poland that morning, the group surprised me with birthday treats. Then at the landing party in Israel, they pulled out a cake! Also this summer I was selected for a photography class through Out Alliance focused on social justice and artmaking; we got to explore the archives of the George Eastman Museum and use drones to take overhead shots of the building. I was one of two students to join my professors on WXXI Connections in July. In January, we’ll have an exhibit opening alongside the professors. I’d love to go to Pratt Institute or Rhode Island School of Design, and hope to use photos taken in Israel for my application.”