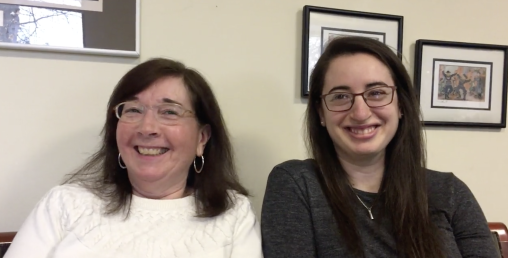 Dancing the Waltzer, from Generation to Generation

It’s time for Passover, and for mother and daughter Debbie and Lisa Waltzer, that means time for reflection, humor, food, and gratitude for their community, where volunteering is as much a family tradition as Nana’s brisket served at the Seder meal.

“My grandfather raised money back in Utica for their equivalent of the Federation,” says Debbie. “I have vivid memories of him going through his cards at the kitchen table. I still have the green leather envelope he used to hold them in.  And I have vivid memories of my mom, Bea Roxin, sitting at her kitchen table in Penfield, and then Brighton, making phone calls for the Federation, until I was doing it along with her.”

“I remember going to Super Sundays when I was a kid,” adds Lisa, “and handing out candy anytime there was an increased donation.  And now I’m the daughter making calls like my mother.”

“We went from rotary phones to cell phones,” Debbie laughs.

In addition to Super Sunday, Debbie has been involved with the Rochester Jewish Coalition for Literacy for over fifteen years. For her part, Lisa has served on the Federation’s Community Relations Council and is currently on the Advisory Committee for Roc City Jews, organizing programming for young Jewish professionals, from social events to volunteering at Pencils and Paper and Foodlink.

“My roommate and I have also hosted two Shabbat dinners with help from the Federation,” says Lisa. “We had about ten people both times. It’s a way that Federation has helped not only with volunteering opportunities but also building community with young Jewish professionals like me.”

“I look forward to volunteering,” Debbie says.  “With Super Sunday, it’s always a charge to be there working with everyone, there’s such comradery and reaching out to people over the phone can sometimes really make a difference.” There was the time when Debbie learned that the woman she was calling was recently widowed. “She told me, ‘I'm in bed and I shouldn't be in bed, but I am, because I'm depressed and I'm lonely.’” Debbie lent her a much-needed ear, and from the call came the idea for a support group for widows.

For Passover, the Waltzers enjoy coming together at friends’ homes and at community seders at Temple Beth El. “I love all the questions we ask each other,” says Debbie. “And of course feeling grateful for how lucky we are to be where we are. We all share that equally.”

What goes on in the Waltzer kitchen during Passover prep is another story.  Debbie makes a carrot kugel that is usually in great demand from everybody (“It’s a recipe from a Hadassah cookbook that my mom used to love.”) And does Lisa get to help? “I help when I’m allowed,” she says.

“Sometime I let her stir what’s on the stove,” Debbie explains, “but I pretty much own the kitchen when it comes to Passover.”

“When it comes to anything,” laughs Lisa.